Introducing our DIRECT & ONLY NUMBER 285-GULF! WELCOME to your HASSLE-FREE GULF LINE 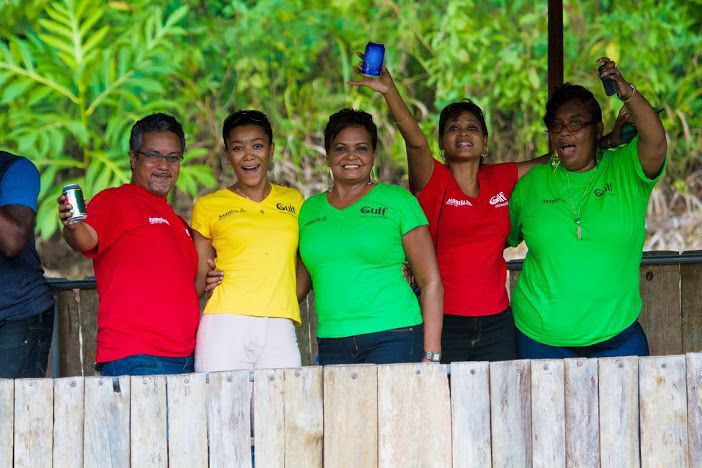 Team building may have been the main objective but all those who attended the Gulf Insurance Limited and Assuria Life (T&T), previously Mega Insurance Company Limited, joint family day 2015 got so much more. On Saturday, May 23rd, employees and their families of both companies were shuttled to “Trevor and Merle’s Place,” the Valencia nature centre located 5.5 kilometres East of Valencia at the crossing of the La Seiva River.

The unforgettable day started with Founder of the Nature Centre, Mr. Trevor Anthony, conducting a memorable tour of the trail as he enlightened all on this country’s exceptional and internationally recognized local flora and fauna which lined the pathways of rainforest. Our adventure seeking participants rose to the occasion as they enjoyed powering through the at times challenging hilly terrain of the main trails. One of the major highlights was the breath-taking Merle Falls where hikers were able to off load and immerse themselves in the cool, clear waters of a plunge pool.

Nature lovers choosing to remain at the recreational facility also got exactly what they wanted, and basked in the peaceful ambience for rest and relaxation. Under the shade of great oaks and nearby green meadows, leaves rustled in cool breeze that was enough to put anyone into snooze mode, but no one was allowed to with all the music and fun activities held throughout the day.

Excitement lit up the face of every child in attendance as they enjoyed the beautiful weather and picturesque surroundings. The on-site petting zoo which housed a diverse collection of both wild and domestic animals was a big hit. The day was made unforgettable for those who were able to enjoy  horseback riding for the first time. Among the other numerous child friendly activities were face-painting and bathing in one of the river wading pools.

As with any local family day football and cricket matches took centre stage during the day among the many other group activities held.  The delicious menu of the day included a variety of local favourites, among these, early morning breakfast of bake and shark, turkey sandwiches along with a barbeque lunch and evening palette of slowly roasted, mouth watering, pork. This along with all the freely available delicacies and deserts must also be mentioned as part of the day’s highlights. The day closed with dancing and more merriment.

The event was very timely given the recent acquisition of the former Mega Insurance Company Limited, by Assuria N.V. also the parent company of Gulf Insurance Limited. Employees of both companies appreciated the collaborative efforts of both organisations to produce an event focussed on building effective working relations among staff of both companies. Employees were particularly appreciative of the attention to detail that contributed to making the day a resounding success. It was the first such occasion since the joining of the two companies allowing for such interaction among staff.

Gulf Insurance Chief Executive Officer “Jason Clark” expressed noted commitment by staff given the high turnout, high level of engagement and overall level of participation. According to the leadership team the companies remain committed to investing in employees, and to building human capacity. Gulf Insurance ltd and Assuria Life T&T Limited understands that the continuing growth, and success of the company in a growing industry that remains highly competitive rests in the hands of employees who are happy and productive.

The leadership of Gulf Insurance Limited and Assuria Life (T&T) Limited would like to thank all our staff who attended along with their families thereby making the event the resounding success it was.  Sincere gratitude and appreciation are extended to the Organising Committee for the hosting of an outstanding event. We look forward to many more as our joint team moves ahead in the future.

Call Me
Please provide your name and contact number and an agent will contact you. Agents are available from 8AM to 4PM from Mondays to Fridays and 9AM to 1PM on Saturdays